Another summer, another wonderful Indietracks music festival. I was lucky enough to hit my fourth go-round to Indietracks in four years, down in Derbyshire at Midland Steam Railway, a working railway with model village that plays host to the music festival for three days every July. Good times.
As in previous years, Indietracks asked if I’d shoot press photos for them while I was there; happy to help. It’s a small festival, extremely family friendly and actually, just friendly. As a resident of Scotland — and not Edinburgh or Glasgow — it’s also the one time of the year when I can get a firm indie music fix, all in once space and over the course of a weekend. Plus bands and music festival attendees are super fun to photograph.
Thank you to everyone this year for letting me grab a photo of you. If I missed you, I hope to do it next year. Likewise for bands. I didn’t get to see every band that I wanted to see at the festival, not least due to some overlaps between the outdoor stage, the shed (indoor) stage, the church stage and the train stage. The latter is an intimate acoustic show played to a box train car filled with an audience. I didn’t make any this year, though have done so in the past — great fun, if often a bit humid.

You Left Me Standing in the Rain (and Wanting More)

Highlights for me this year at Indietracks on the music front?
With thanks to For the Rabbits’ review of this year’s festival for help, covering both Friday-Saturday as well as Sunday (especially with band member names and other projects), if I had to pick just 10, here goes: 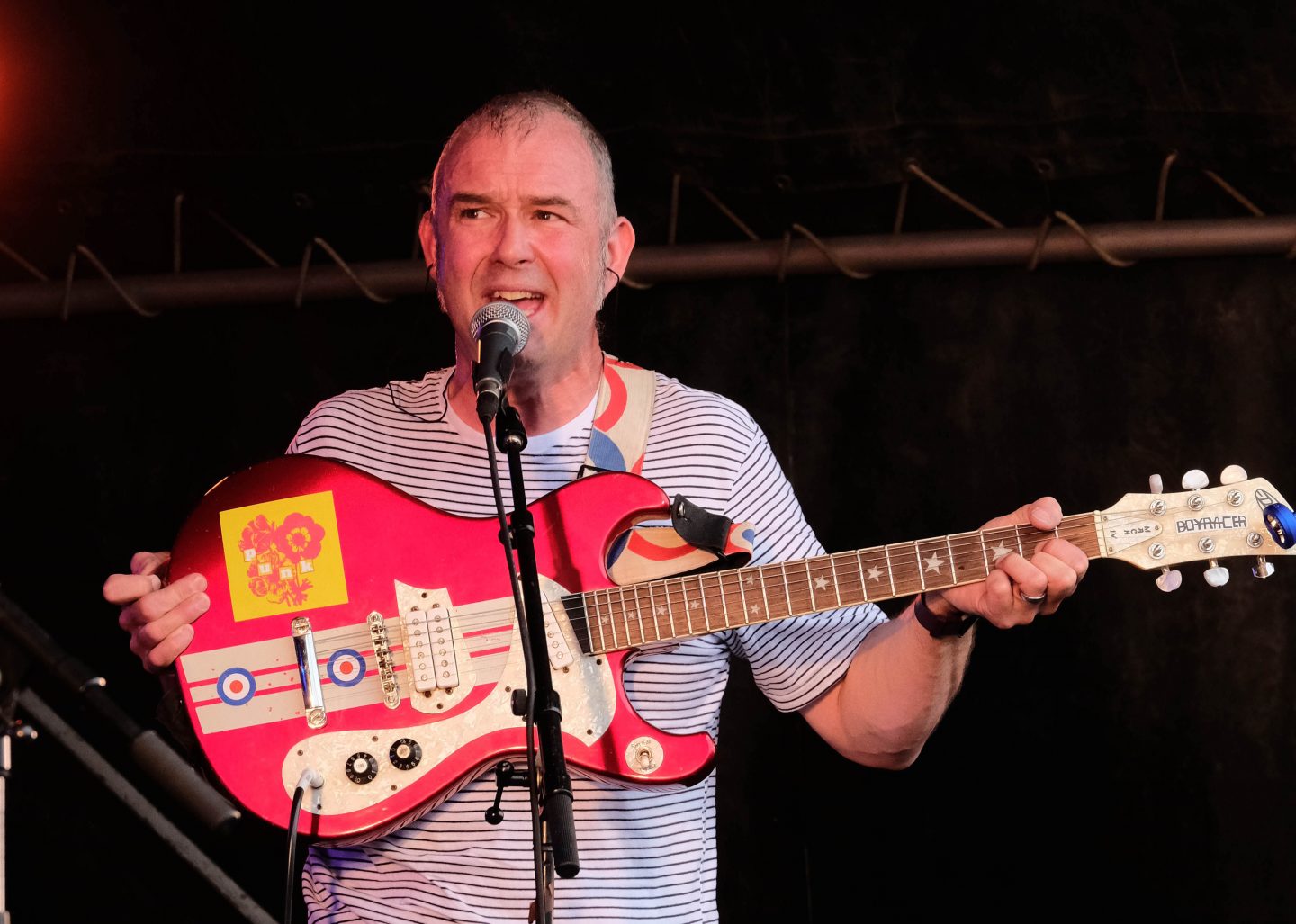 After missing them way back when in Cambridge, Massachusetts, when they played the Druid, I thought it wouldn’t be long until they were back through town. Fast-forward about two decades, and I finally get to see Stew and crew, after I met guitarist Matt (“Matty’s Untitled Song”), aka “The Tall Boy,” my first year at Indietracks. It would have been wonderful to catch band member Jen (to whom Stewart is married) as well if she’d been able to make the jump. (Early request for when that happens: “The Other’s Way.”) With luck, next time, and in a lot less than two decades. 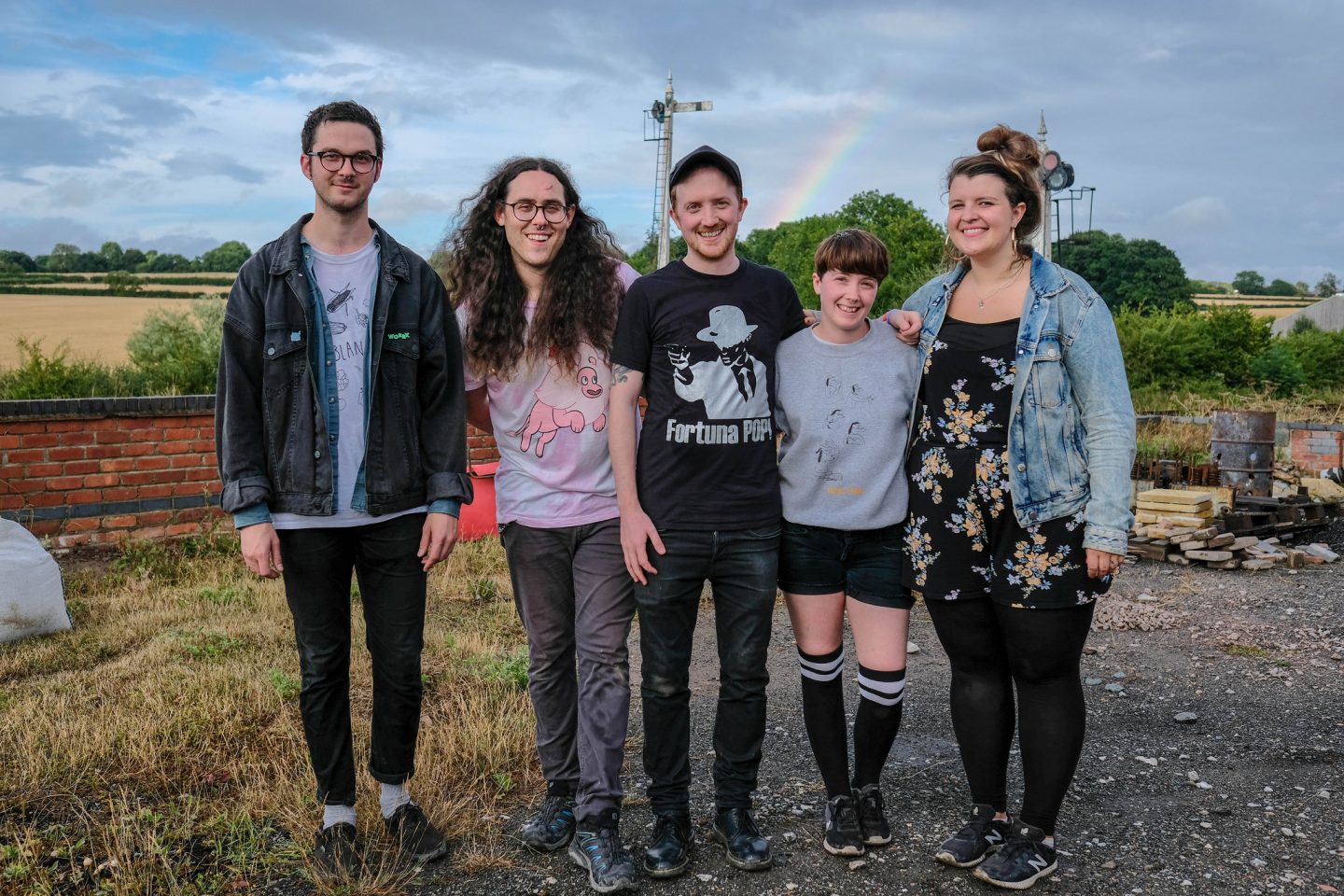 “50% outrage, 50% ennui.” This Durham-based band features two members of Martha, plus a third Martha member in the full touring lineup. They performed on the heels of Onsind’s stellar “We Wilt, We Bloom” album, released earlier this year. As with Martha, cue not only intricate sonic hooks and great songwriting, but also energy to burn on stage. 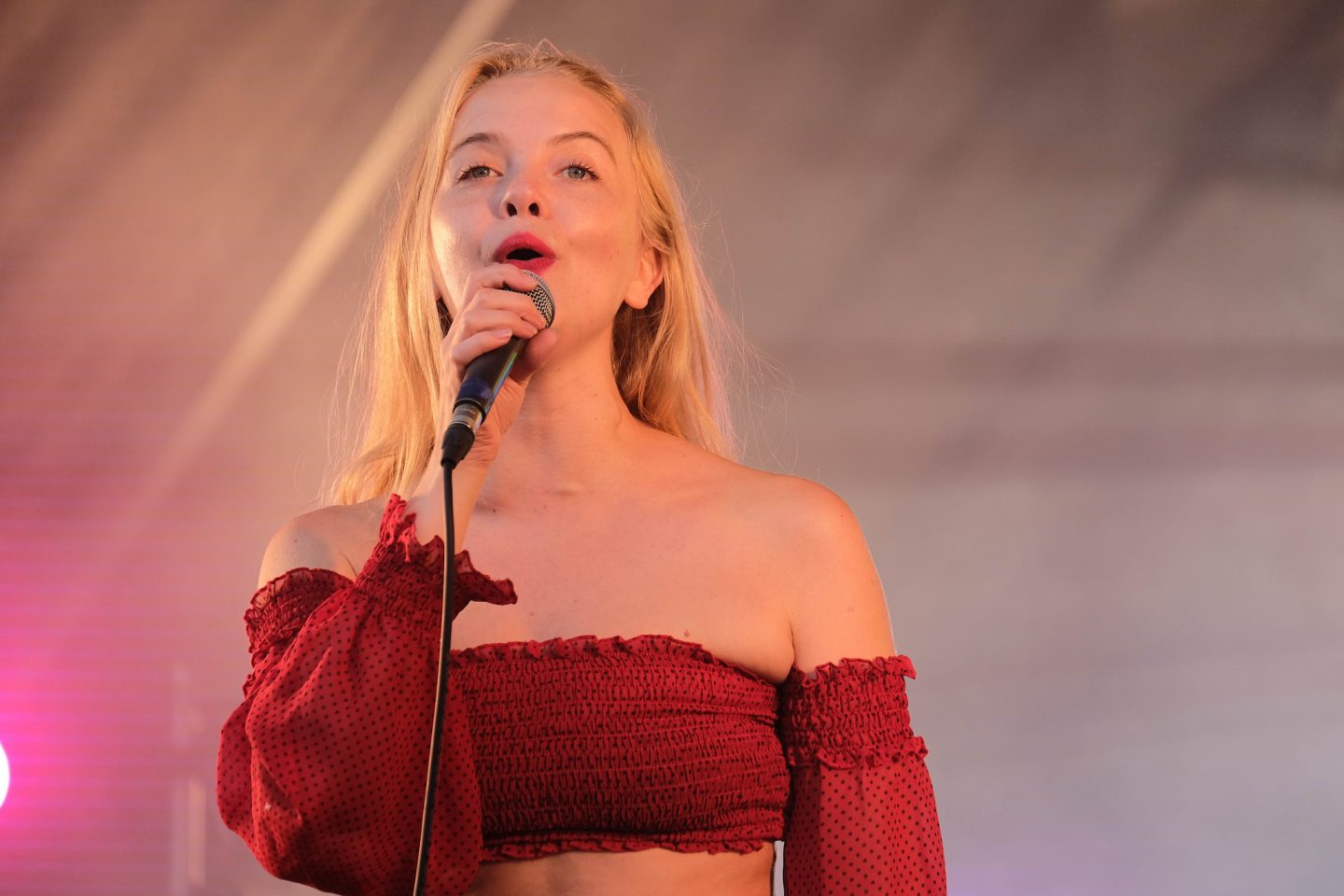 I hadn’t heard of this London-based pop-punk trio previously, which formed in a heady daze of Yeah Yeah Yeahs albums and art school. The group just issued its first, eponymous album in January. They owned the stage. “We’re having so much fun,” goes a line from “Hey Heartbreaker,” and it showed. 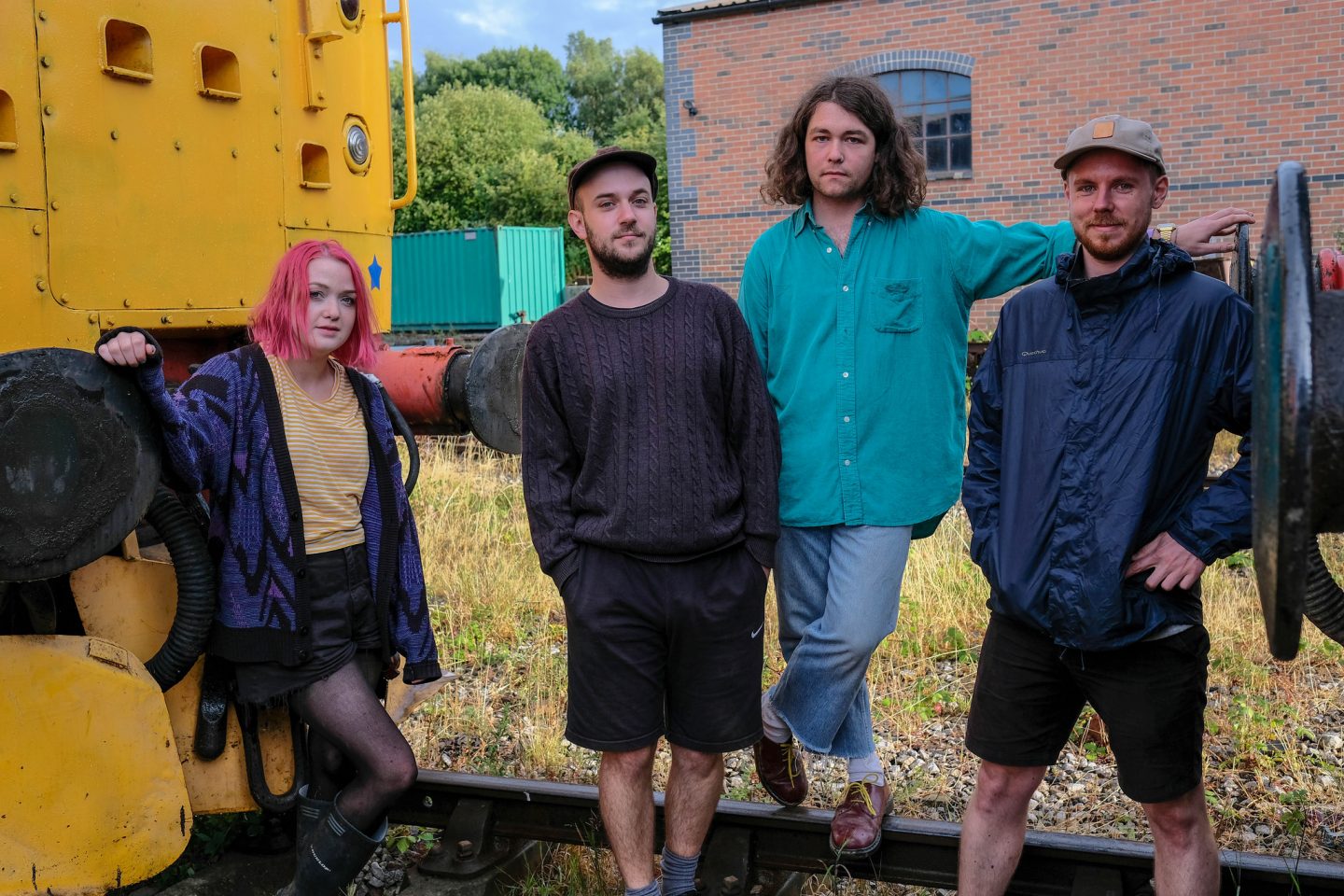 Kudos for opening the festival on Friday night as the first of three acts, with their energetic pop and fun stage banter. Also for taking a great band photo. 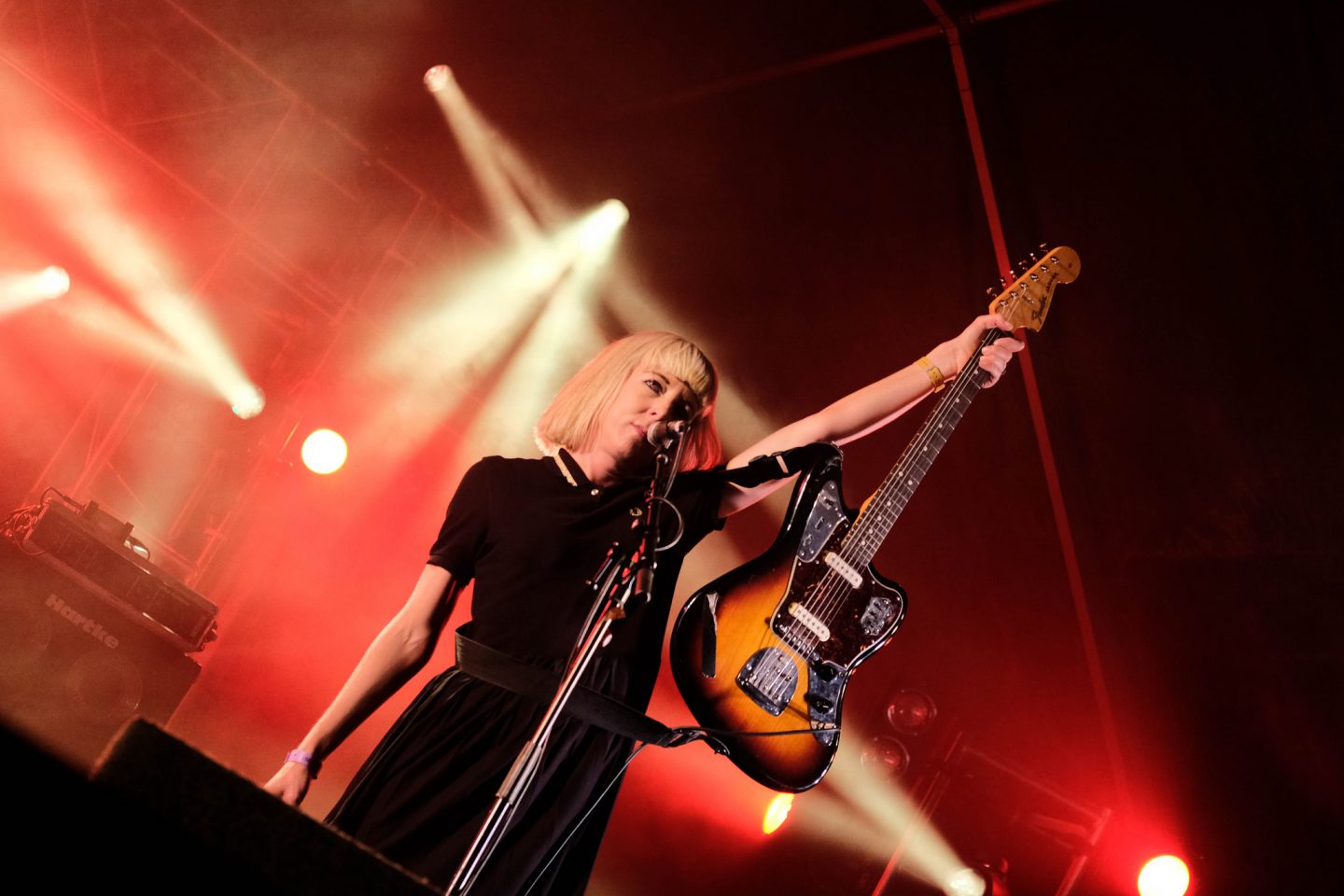 These Friday night psych-rock headliners from Lancaster delivered, owning the outdoor stage even though they’re only a two-piece. As they’d done before a few years back, on the indoor stage, and afterwards selling out of their Lovely Eggs football scarf, bearing the beloved phrase from their signature song — F*** It — and regularly waved by diehard fans. 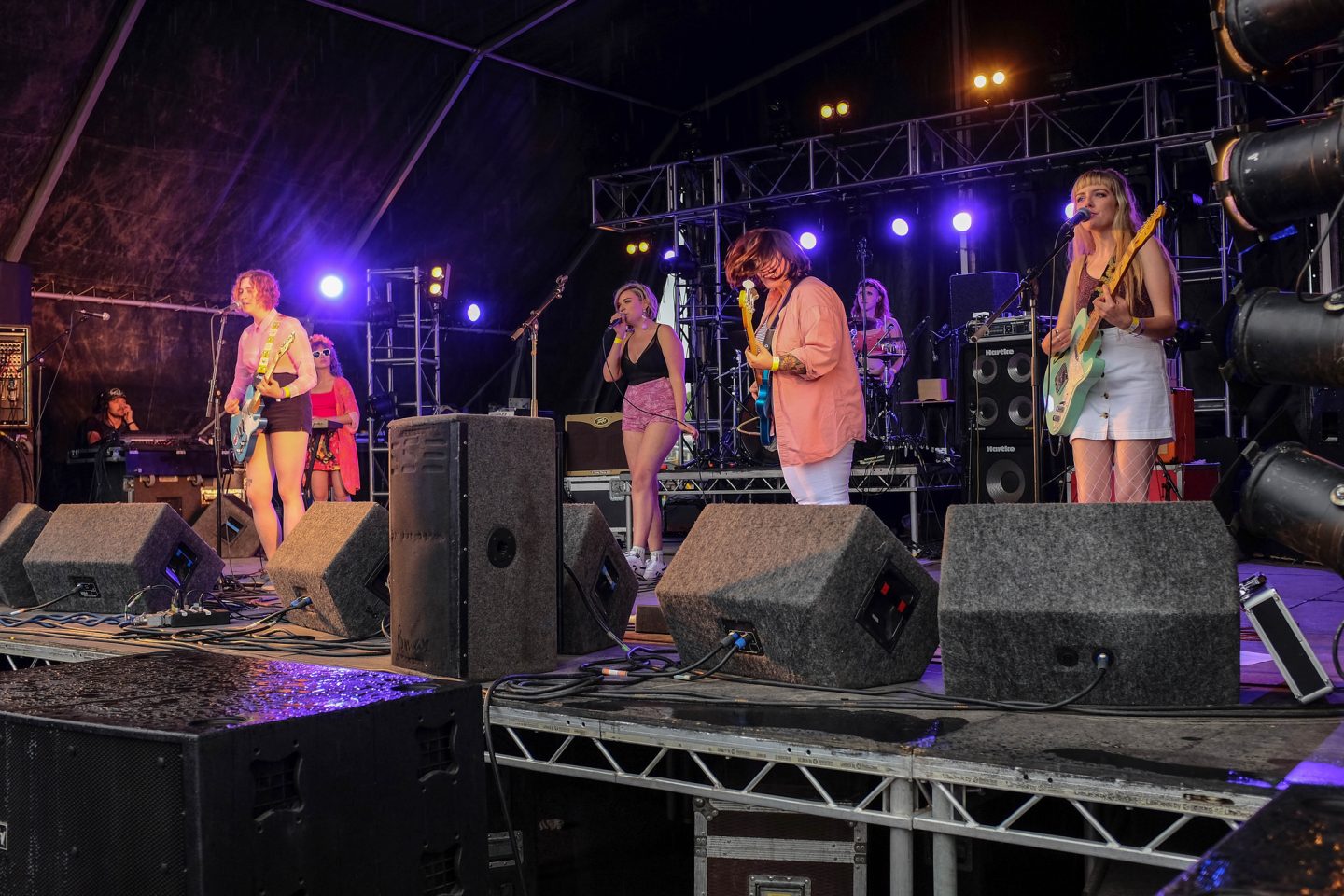 My first-ever thought when I heard them five or six years back was that they sounded like a wonderfully updated Sundays with a more modern lyrical sensibility. Having seen them perform twice now, live, they’re a fantastic act, even in the rain. (I’d have dozens more photos of them too if it hadn’t been bucketing.) 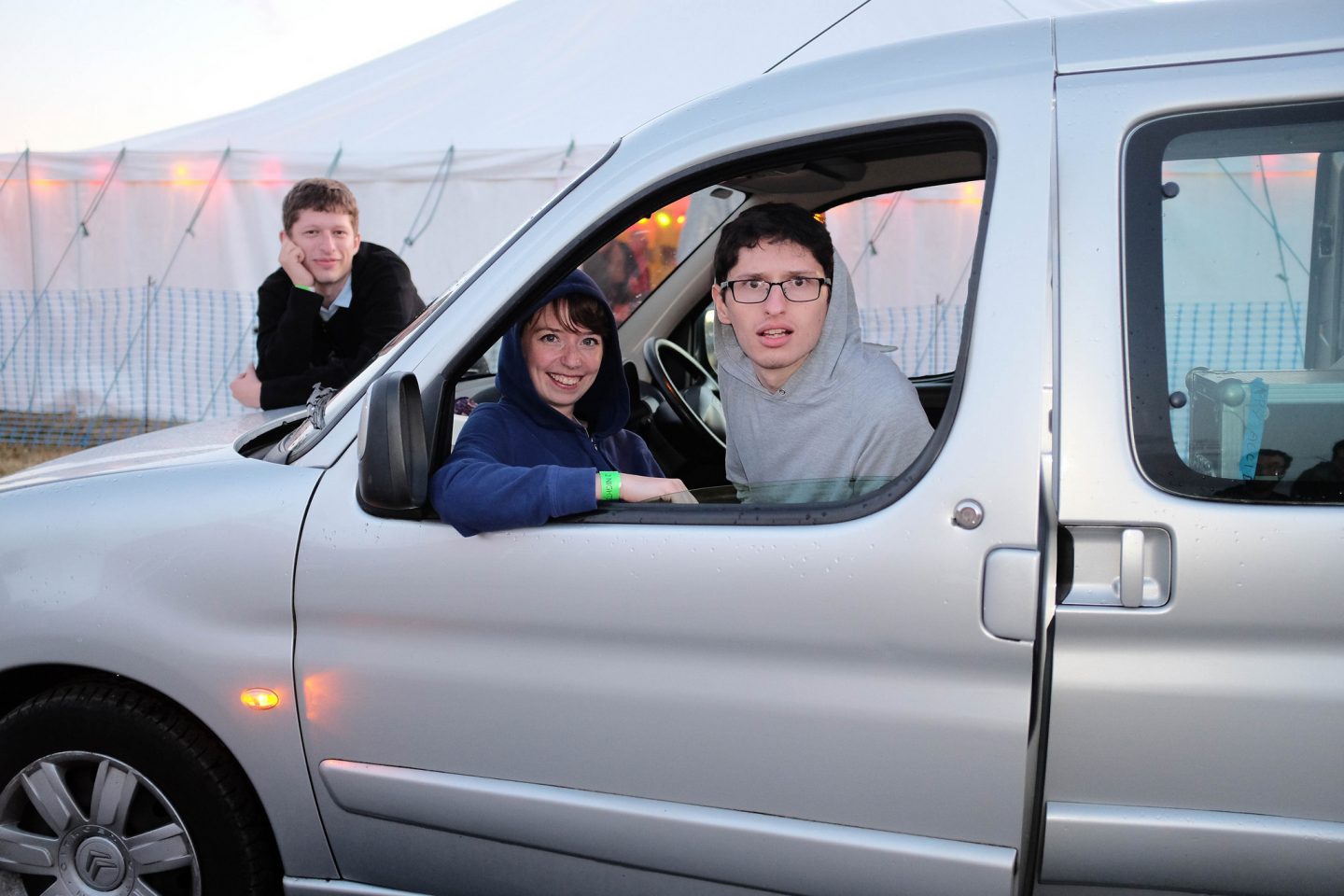 Because aren’t these the best kind? 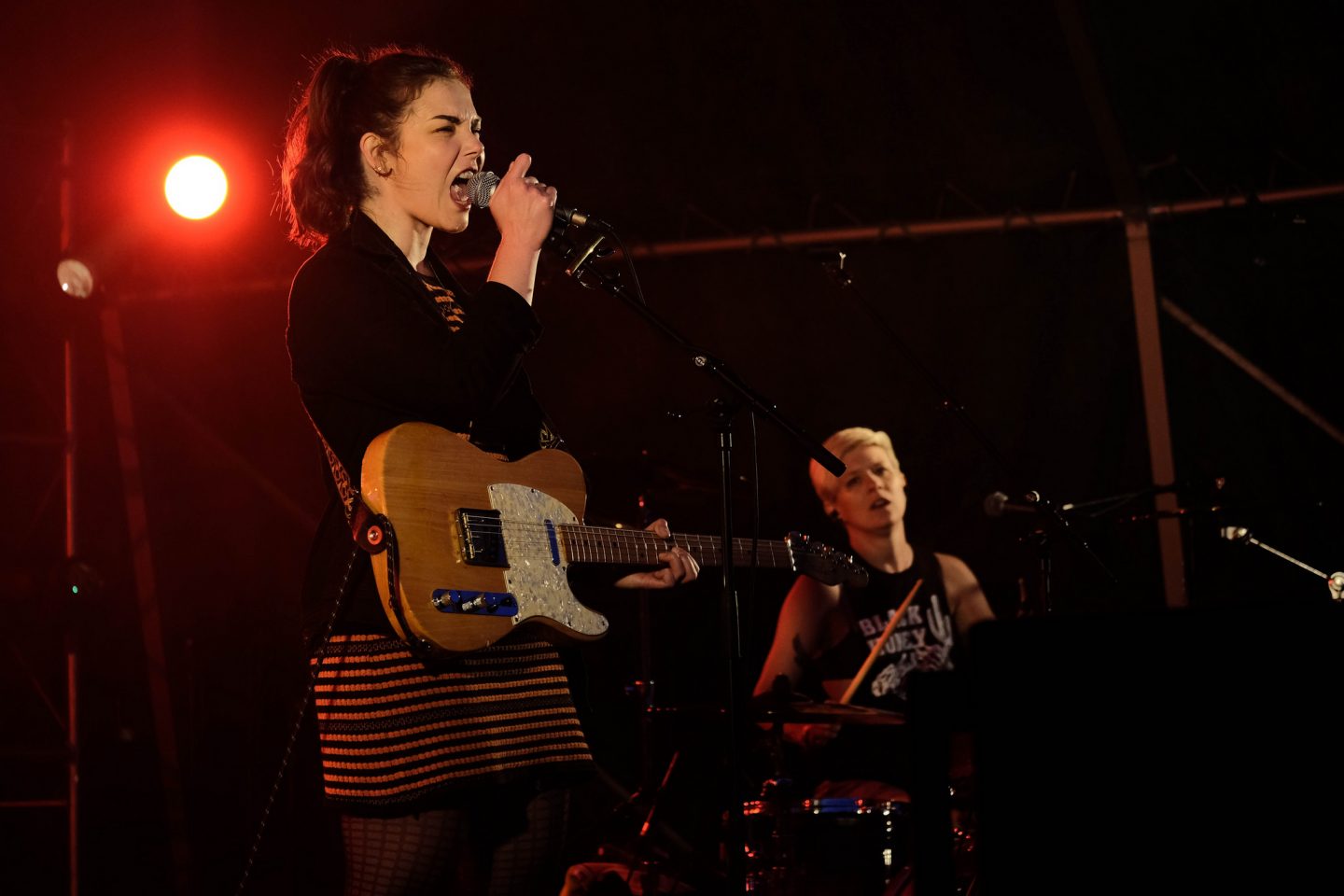 Indietracks 2018 was the year of power duos. After Friday night headliners’ Lovely Eggs, this Glaswegian duo delivered — as they had when I saw them last year in a hole-in-the-wall venue in Dundee. (Kudos for coming to Dundee.) Apparently they’re heading into the studio to record their 3rd album; bring it on. 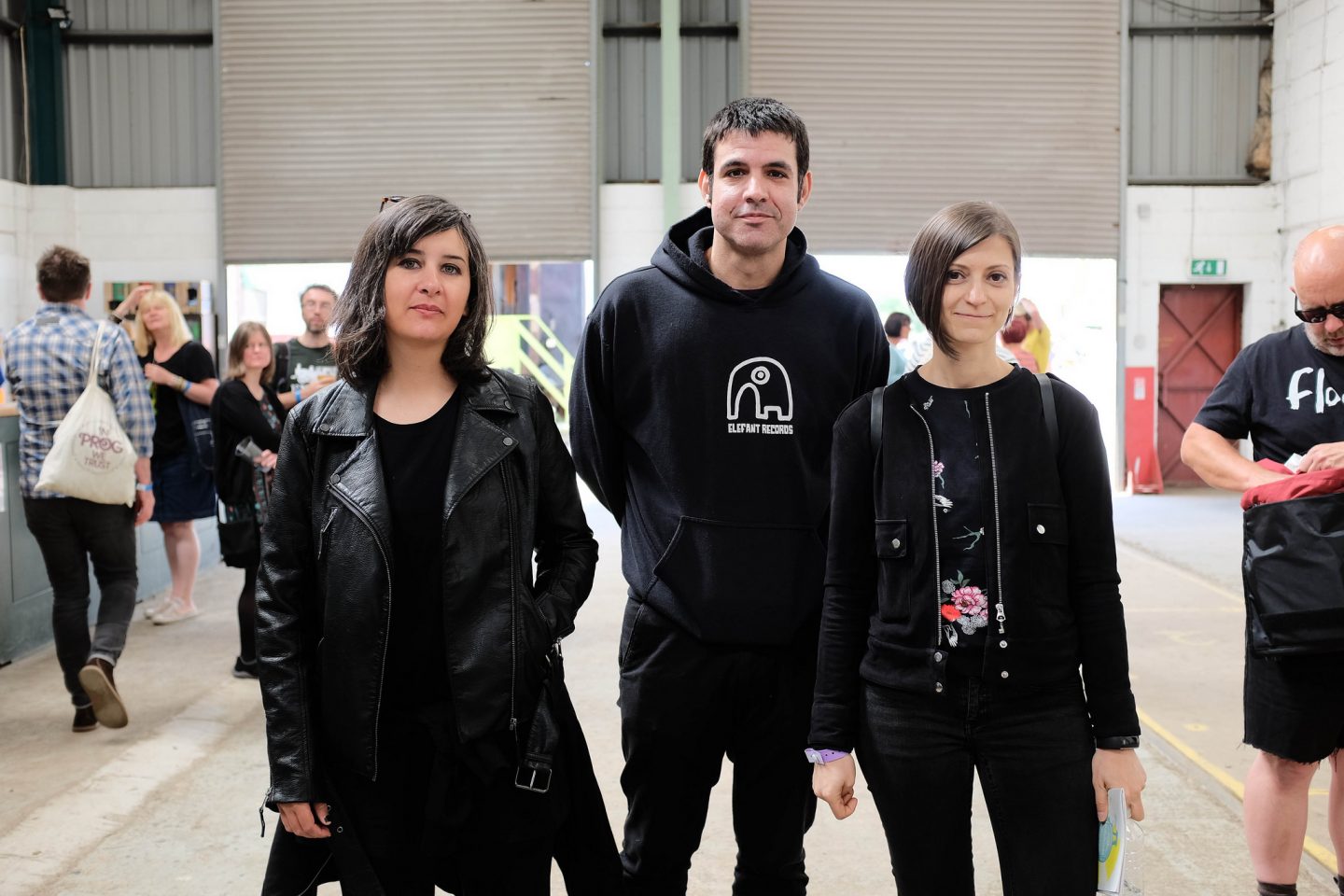 Spanish dream-pop atmosphere merchants. Love this trio. I was lucky to see them at Indietracks in 2015 and again this year. Both times, they did live performances prior on Radio 6 (I love Radio 6) and also impressed. 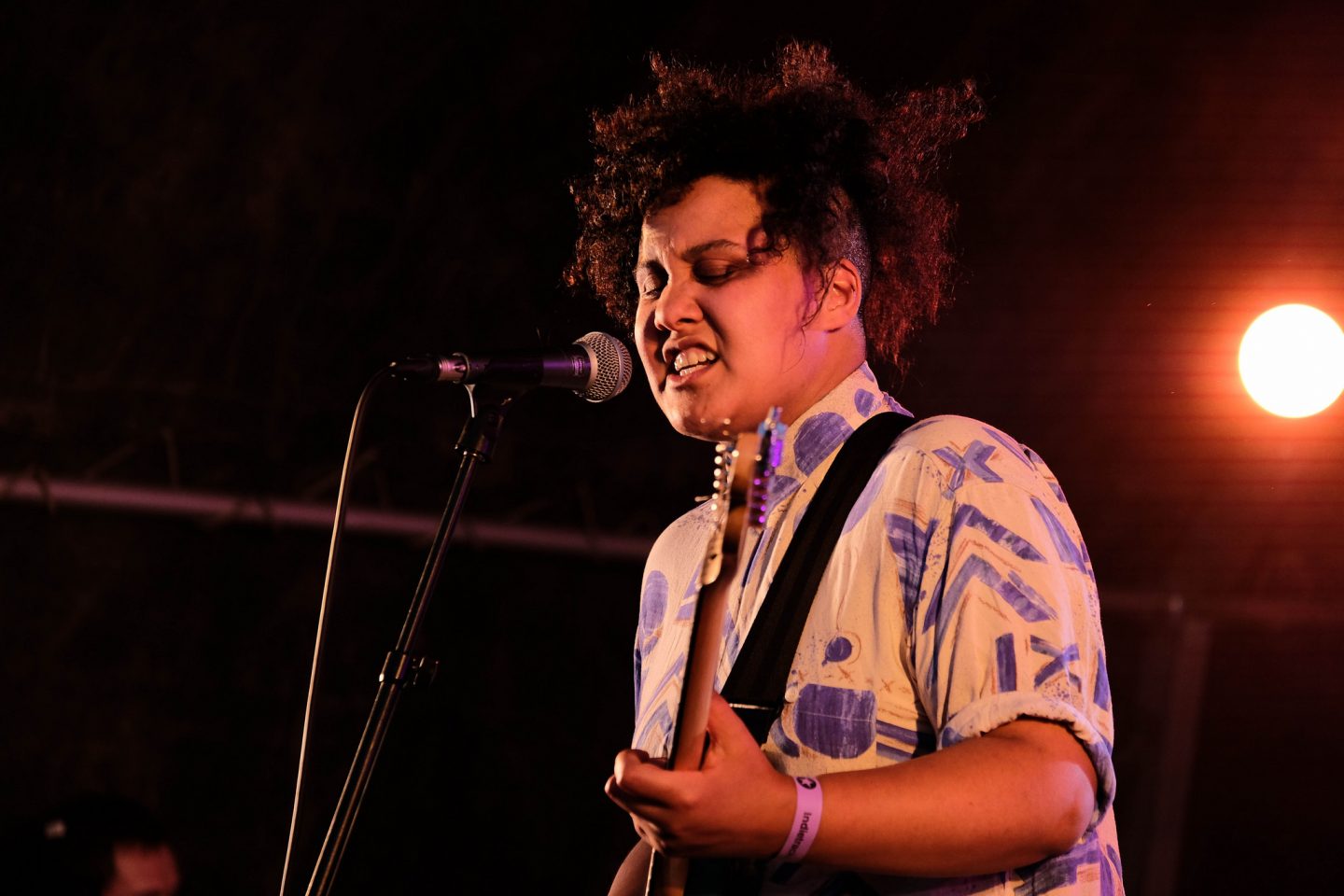 Fun four-piece includes amazing vocalist and guitarist Rachel Aggs, who appeared at Indietracks last year with the band Shopping. (Note to self: Check out more Sacred Paws material.) I belatedly got the latest Shopping album “The Official Body” and it’s a stonker. (One standout track: “My Dads a Dancer.”) 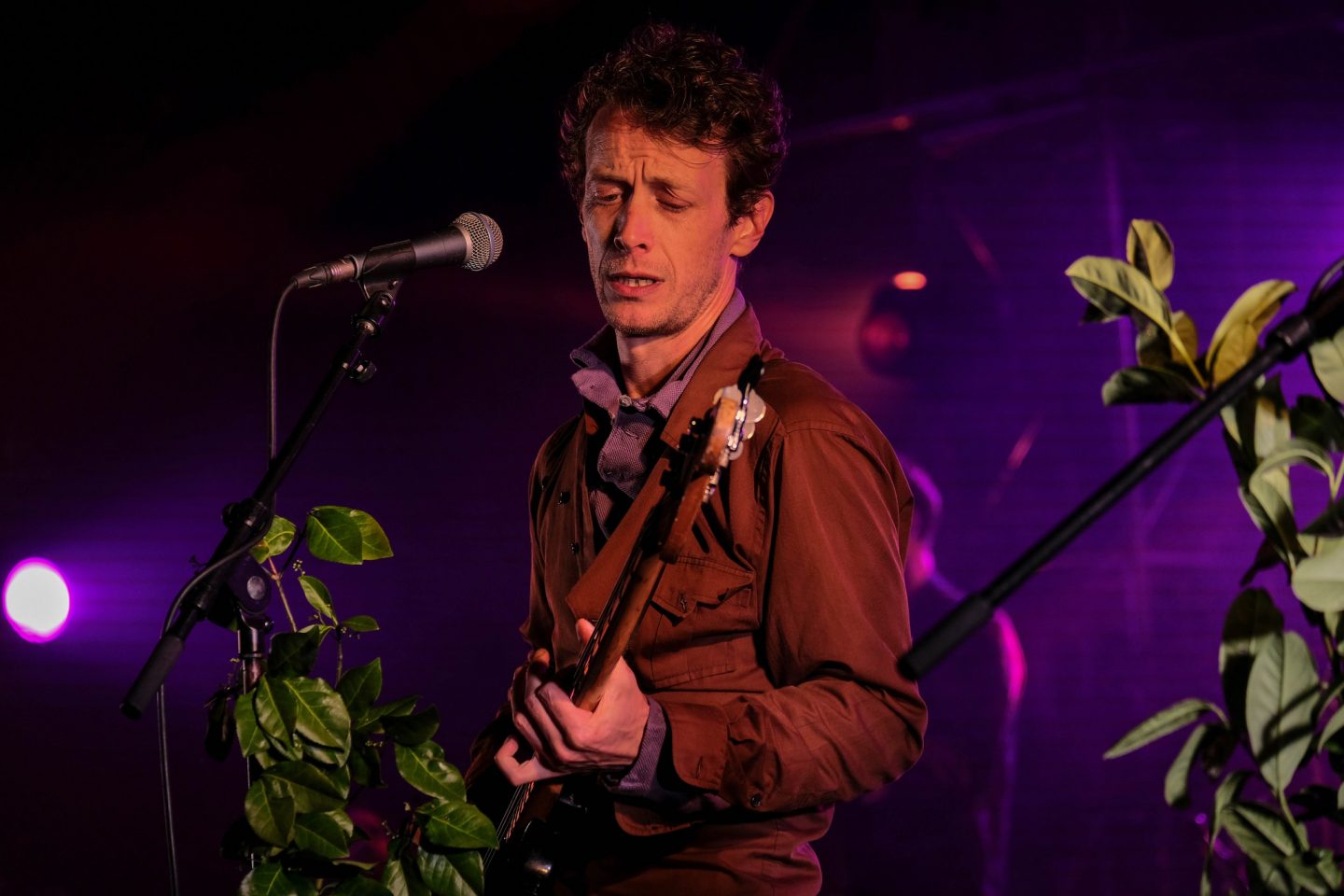 I first clocked this band, appropriately enough, my first year at Indietracks at the midnight disco, when “No Lucifer” came on. I’d never heard of them before, but they’re cult favorites around these parts. Great, intense and focused set, enhanced visually by masses of found shrubbery and the 11th hour arrival of two massive, dancing bears (black, white) posing for selfies with the crowd. What’s not to love?

Whoops, I guess this review goes to 11. And it only scratches the surface of the weekend’s wonderful performances. Not to mention the joy of wandering near a stage and hearing a wonderful new band that you’ve never heard before. And back to Indietracks I will go.
In the meantime, be sure to check out my portraits of attendees, portraits of bands and performers, or peruse a big grab bag of everything, including performances.